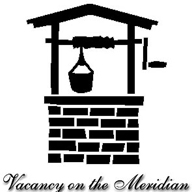 the untitled project. - Vacancy on the Meridian (2005)

One afternoon, a young girl named Abagail was running and playing near a well. Suddenly, she tripped and tumbled deep down into the well. When her parents and neighbors were alerted, they just didn't seem to be very worried about poor Abagail.

Eventually, night set in on Abagail in the well, and she was becoming quite panic stricken. After many hours of being awake, she was befriended by an odd rabbit who took her on a strange journey through distant lands. After her adventure with Mr. Rabbit, Abagail felt very tired and generally unpleasant. She soon fell ill with a chill and tremendous headache.

When Abagail finally fell asleep, her nightmares were filled with darkness and misery. She awoke a number of hours later to find that it was still dark out. Feeling very cold, malnourished, and hopeless, Abagail began yelling and screaming for help. Unfortunately, her cries went ignored by the villagers.

Abagail soon accepted that she would not be rescued from the confines of the well. Around this same time, Abagail began slipping in and out of consciousness, revisiting the nightmares she experienced earlier.

Finally, the rain began pouring from the sky. Abagail knew her time had come, and rested peacefully, hoping for the best...

01) Oops, She's Toppled into the Well

05) The Wails of Abagail


Notes: I highly recommend listening to this album in order, with headphones.